Preamble: I never talk politics on this site but, just this once:

A moment of solidarity with Paris, please. The French are our oldest allies (despite congressional clowns and their cries of “Freedom Fries”). If we want to uphold freedom then tonight we must say, very loudly, that Nous sommes Francaises. And then, when we’ve said it, we should say it again but more loudly, and again, until eventually the message gets through to not just the death cultists but our masters, who, even while pretending not to, promote those cults.

An Edgar Wallace-like romp that keeps us on our toes throughout. 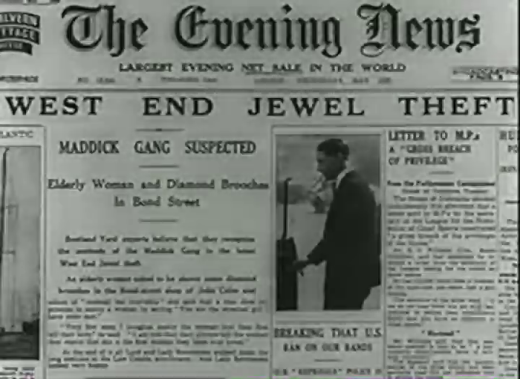 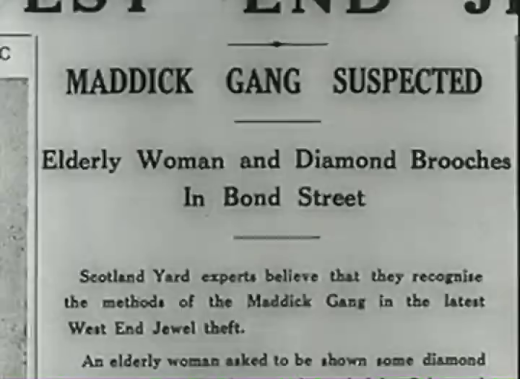 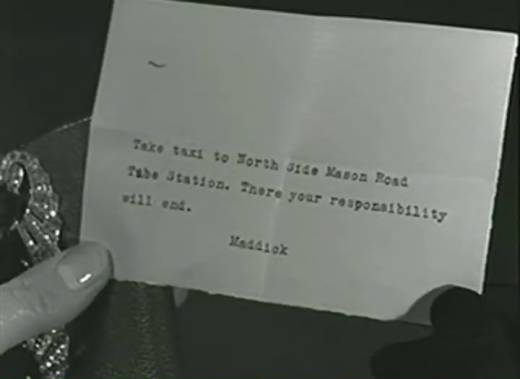 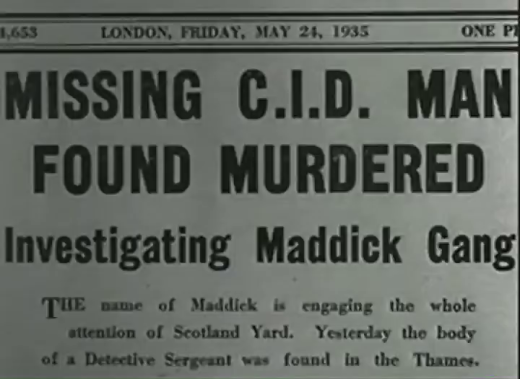 The documentary evidence builds up.

An entertaining quota-quickie romp of a crime movie, very much in the Edgar Wallace mold. It’s noteworthy as the English-language debut of Lilli Palmer.

The Maddick gang has been terrorizing London with a series of ingenious jewel thefts; we see one of these, as a respectable elderly lady (Allgood), acting in obedience to (we assume) blackmail, lifts a bauble from a jeweler and then leaves it for pickup in a commandeered taxi. The gang has already killed three informants that Scotland Yard tried to milk for information, and now CID Detective-Sergeant Collins, one of the cops on the case, has been murdered. Left on his body was a scrap of paper bearing a cryptic clue: 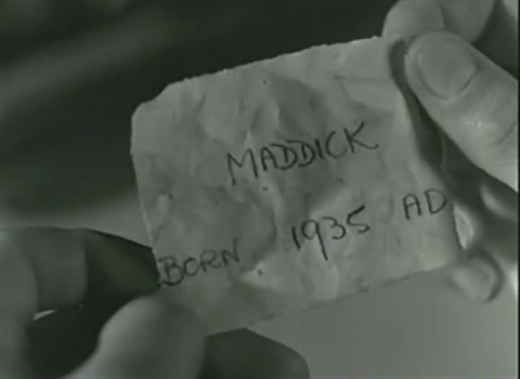 No one, not even Maddick’s most loyal sidekicks, has ever seen the man—all they know of him is his voice, relayed over a radio link. The fingerprints of Edgar Wallace are very clear; I haven’t counted the number of Wallace’s novels in which the identity of a criminal mastermind is completely unknown to everyone, including his supposed closest associates, but there are plenty.

The Yard’s Detective Inspector Cardby (Merritt) comes up with an out-of-the-box plan to infiltrate the gang. If someone can come up with an even more ingenious scheme to rip off jewelers, is there not a possibility that Maddick might recruit this promising talent? Step up Pete Borden (Knight). Pretending to be the secretary of the Earl of Metcalfe, he persuades a jewelry store to send valuable bracelets to the earl’s home, then uses a clever ruse to reclaim them. The theft is blamed on Maddick, who’s naturally curious as to the identity of this newcomer on the criminal block. 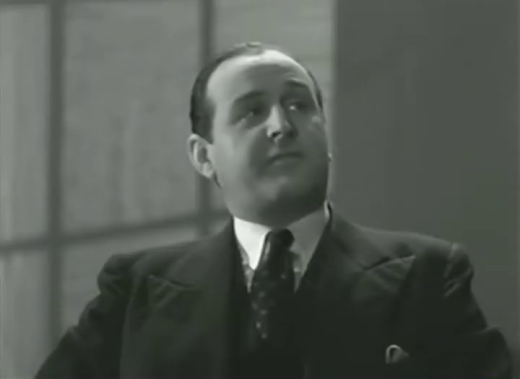 The Assistant Commisioner (Cecil Parker) goes along with Cardby’s idea.

Pete, for his part, is doing everything he can to draw the attention of Maddick. Acting the part of a squiffy aristocrat, he manages to inveigle a seedy barman called Fred (uncredited) into giving him an entré to an illegal gambling club. Sicced onto him immediately is the hostess Natacha (Palmer), a Russian émigré whose job it is to make sure gullible male guests lose as heavily as possible. There’s instant electricity between them. She spots Pete as an honest man rather than a crook, and is dismayed when he tries to enlist her help in fencing one of the stolen bracelets. 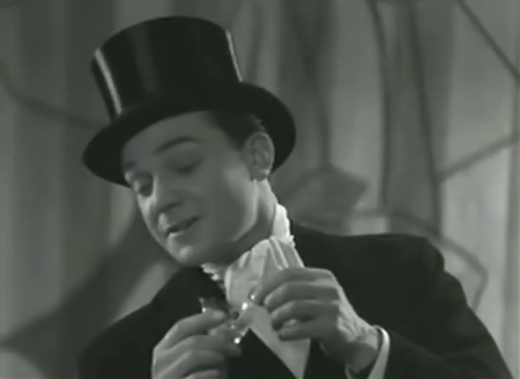 Borden (Esmond Knight) acts the part of the squiffy aristocrat.

Next thing Pete knows, he’s being taken blindfolded to Maddick’s HQ, where, with a bright light in his eyes, he’s interrogated by Maddick’s almost indistinguishable sidekicks Delaney (Lovell) and Clancy (Soutten); Clancy’s the one with the limp. (I’m pretty certain that even the cast and crew had the same difficulty as I had, because I could swear that at one point Pete addresses Clancy as Delaney.) Maddick tells him ominously that “Remember, once you’re in you never get out . . . alive.” 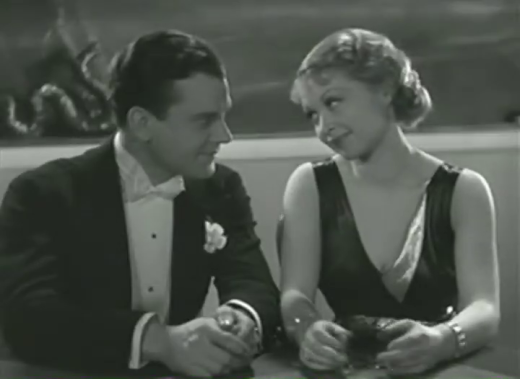 Pete manages to get news to the Yard of where the gang has lodged him, and Cardby promptly installs in the apartment opposite a deaf lipreader (uncredited) and another cop (uncredited) who between them interpret the communiques that Pete vigorously mouths from the window of his room. 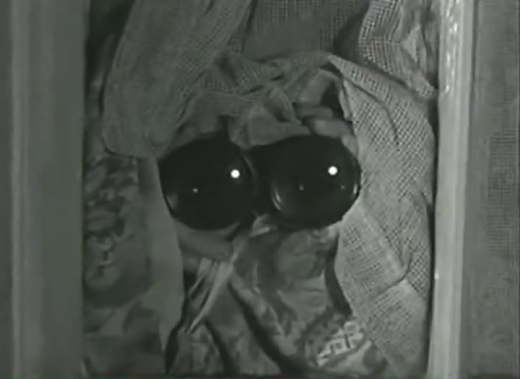 Lipreading from a distance. 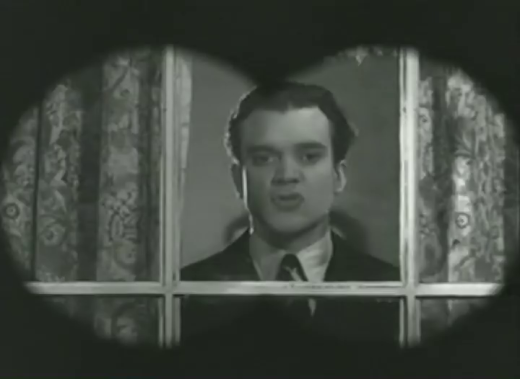 Pete (Esmond Knight) says everything VERY CLEARLY for the lipreader.

Maddick decides to test Pete. He must use his ingenuity to help a counterfeiter allied to Maddick get acquitted in the court case he faces. Pete enlists bookie Andrew Purvis (Patch) and the accused’s lawyer Adrian D. Newall (Gawthorne) and counsel Conway Addison (Goldie) in order to secure the acquittal. The extent to which these two are enmeshed in the Maddick structure will become increasingly obvious as time goes on . . . 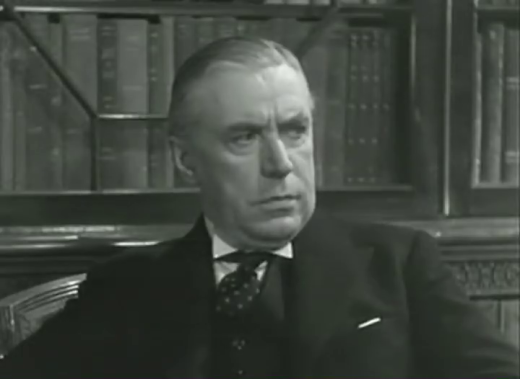 One of the movie’s major setpieces is the ball held by Herbert, Lord Mead (Clarke), and his wife (Arbenina). Maddick sends Pete and Natacha there in the guise of an Italian count and his wife and gives them precise instructions as to how they’re to filch the Meads’ fabulously valuable necklace. The pair are doing quite well until, first, Conway Addison turns up and recognizes Pete, and, second, the gossip columnist whom Cardby has sent to keep an eye on things, Sybil Kadon (Millican), proves to know the real count whom Pete is impersonating. The attempted theft proves to be a bit of a fiasco, especially when the necklace—successfully liberated by Natacha, despite everything—turns out to be a paste imitation.

Long afterwards, Pete takes Maddick to task about the failure of this venture:

Pete: “If you’re Maddick, why did you help trip me up at the Mead reception?”
Maddick: “That was simple. I wasn’t Maddick then—I was [real identity]. I had to act the part.”

That exchange forms part of an interview Pete and Maddick conduct much later in the movie in Maddick’s country house The Withies, when Maddick is proposing to kill not only Pete and Natacha but also all the rest of Maddick’s crew, he having rigged up one of the rooms in the manor as a gas chamber (a chilly reminder of what Germany was then gearing up to do). 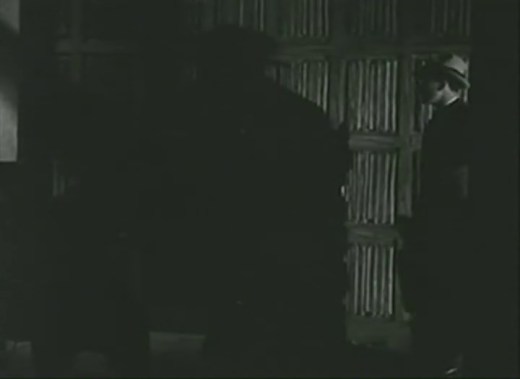 At last Pete (Esmond Knight) is to meet Maddick.

In that same conversation we’re given a reminder of not just how much this movie (and presumably its source novel) owes to Edgar Wallace but how much the villains of the James Bond franchise likewise owe to Wallace’s oeuvre:

All that’s needed is the occasional BWAHHAHHAHA. Instead, Maddick punctuates his dialogue with insane cackles, which is just about as good. 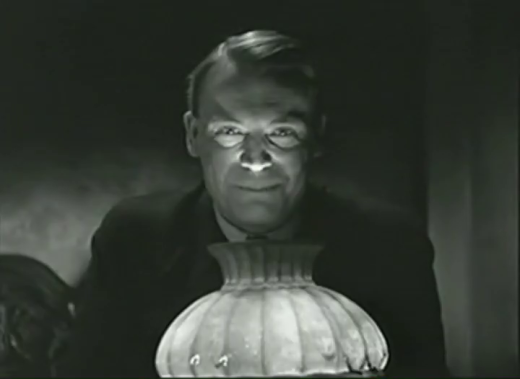 The final revelation of Maddick.

Knight is a somewhat forgotten figure today, although obviously a star at the time. In 1941 he was blinded while on active service at the Battle of the Denmark Strait. This war hero later regained the partial sight of one eye, but no more than that; he continued to perform until the end of his very long acting career—his last movie was Superman IV: The Quest for Peace (1987)—as someone largely unsighted.

Palmer, a German Jew, fled her native country with her parents in 1933 as the Nazis rose to ascendance. She made a stack of movies in the UK before becoming, in 1943, Rex Harrison’s second wife (it was her first marriage). In due course the Harrisons moved to Hollywood, and she appeared in another slew of movies there as well as, with Harrison, a number of successful stage productions, such as the Broadway production of Bell, Book and Candle (1950). She and Harrison divorced in 1957 and she promptly wed the Argentinean actor Carlos Thompson, a marriage that lasted until her death in 1986. What she brings to Crime Unlimited includes not just a dubious Russian accent (there’s an enjoyable self-referential joke when, during the ball held by Lord and Lady Mead, Natacha tells Pete that his Italian accent ain’t that convincing) but also a very attractive screen persona: Natacha isn’t an outright beauty, but you can quite understand why Pete should fall head-over-heels for her so readily.