Every now and then the UK’s cheapie studio Merton Park could produce a gem, and this is arguably one of them. Mystery Junction may not be a diamond or an opal, but at the very least it’s a fine piece of costume jewelry. In Sydney Tafler, Barbara Murray, Ewen Solon, Patricia Owens, Martin Benson and others it had the kind of cast that most B-movies could only dream of.

Snowy, snowy weather. Elderly spinster Miss Jessica Owens (Silver) is on the train from Pickering to Stanton and points beyond when she realizes that the man sharing her compartment is none other than Larry Gordon (Tafler), author of the thriller to which she has been glued ever since the train left Pickering two hours ago. Of course, he signs her book for her and, with that distinctive smile that authors produce when (a) the good news is that they’re being fawned on and (b) the bad news is that this is likely to be tiresome, he starts answering a few of her questions along the lines of “Where do you get your ideas from?”

But just then there’s a scream from outside the window. Dogged by Miss Owens, Larry goes to investigate. They find that, at the end of the carriage, there’s snow on the floor, which obviously suggests to Larry that the scream came from someone who was thrown out the door. The pair check the other compartments in the carriage, get mixed receptions from their occupants, and discover that one of the compartments is marked “Reserved” and locked; even more startling, an occupant of that compartment waves a gun at them through the door’s glass.

Trying to find the guard, the pair discover two stowaway thespians in the luggage van: Pat Dawn (Murray) and Mabel “Mabs” Dawn (Owens), to give them their stage names—even though not actually siblings, they do a “sisters act.” They also find the unconscious form of the train’s ticket collector (Monckton), beaten over the head and missing his uniform jacket. At this stage everyone agrees it’s time to challenge the guy with the gun. 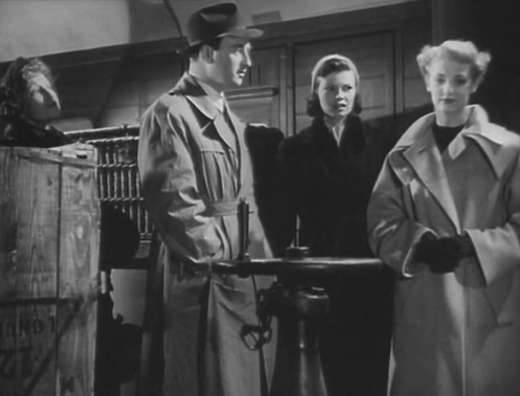 That guy proves to be an armed cop, Detective-Sergeant Peterson (Solon), who has been charged with escorting a suspect, Steve Harding (Benson), to his murder trial in Stanton. Discovering that his backup, Detective-Constable Blake, has gone missing, Peterson rapidly surmises that the unfortunate fellow was hurled from the train by someone disguised as a ticket collector. Accordingly, at the next junction he herds all the passengers of the relevant carriage off to spend the night in the station waiting room, hoping he can summon an army of cops to take Harding to trial and discover who did for Blake.

Innocent and guilty, the passengers/suspects huddle in the chilly waiting room. As in any Agatha Christie novel, there are quite a few of them (in addition to Peterson and Larry):

With the snowstorm howling outside, this ill matched bunch prepare to wait it out. But then a mysterious figure in the blizzard turns off the gas supply, the lights go out, there are shots and, moments later, it’s discovered that Peterson is dead and Harding now has his gun.

Was the shooter’s target Peterson or Harding? It soon becomes obvious that some of the passengers are past confederates of Harding who might want to break him free; at the same time, are any of them in fact in the pay of his old rival/ally Stanley Mason, who killed the woman for whose murder Harding is to go on trial?

Elliot (Philip Dale) and Mabel (Pat Owens) soon take a shine to each other.

Harding starts off with the assumption that the killing of Peterson was part of an effort to free him. Yet Larry soon persuades him this isn’t the truth: if Harding wants to walk away from this he needs to find out who the real killer is. And who better to consult than a mystery writer, namely one Larry Gordon . . .?

Of course, this is all a whimsy. As any cop will tell you, mystery writers are even worse than psychic detectives at solving cases. Even so, the tale is presented with sufficient panache that everything seems to make sense at the time. There are all sorts of twists and turns along the way, most of them to do with the fact that quite a few of the supposedly disinterested passengers have in fact interacted with Harding in the past, and thus have a motive to kill him. The final twist in the narrative is quite beautifully done; it’s one of those twists that you might normally roll your eyes at, but here it’s so sweetly executed, not just in itself but also in the aftermath, that all you can really do is grin in appreciation.

Helen (Pearl Cameron) catches the eyes of the male cast.

Tafler and Solon were among the better screen actors the UK knew in this era; it’s probably due to the low esteem in which UK movies were held at the time in the US that both never achieved international recognition and have been largely forgotten. Tafler is quite splendid as the novelist made good but also the guy who really hasn’t quite forgotten his humble roots. Silver is lots of fun as the starchy spinster who eventually admits to the Dawn “sisters” that her earlier judgement of them as total trollops was completely unjustified, in that they’ve offered her nothing but kindness.

The direction’s no more than perfectly adequate (complete with a poorly staged punchup) and the cinematography is hardly inspired—except for some of the snowscape shots. Yet Mystery Junction really is worth your hour, despite showing its age on occasion—as when Larry remarks, with not a whisper of contradiction from the rest, “Foster and I could try to reach the village. [But] that leaves one man and three defenseless women for Harding’s gang.”

After the punchup, Larry (Sydney Tafler) has his injuries tenderly tended by Pat (Barbara Murray).

There’s an oddment. Of the two (very) pretty stage “sisters,” one is called Pat while the other is played by an actress called Pat; similarly, while there’s an actor called Benson who plays a character called Harding, there’s an actor called Davies who plays a character called Benson! Life must sometimes have gotten very confusing on set.