Hawtrey Charters (Radford) and Sinclair Caldicott (Wayne), the two eccentric, cricket-maniacal Englishmen made famous in The Lady Vanishes (1938), appeared in a series of other movies, of which this is one; it’s adapted from a BBC radio comedy drama.

The pair are members of an escorted Middle East tour when their charabanc runs out of gas in the middle of the Saudi Arabian desert. They’re at first a bit leery at the approach of a caravan of Arabs, but soon it emerges that the leader, Sheik Ramda (Oliver), went to the same English public school as Charters. The Sheik puts all the tourists and their guide up for the night, which is welcome; even so, our two heroes do have concerns, such as that Caldicott might be late for his rendezvous in Budapest with his fiancée, Charters’s sister Edith (Hood), and, far more important, that both men might miss the final (cricket) Test match between England and the Windies at Lords. Moreover, as Ramda explains to them, there are agents of a foreign power stirring discontent among the traditional Arab population.

Back in Baghdad and with some time to spare, they seek an eaterie. What they find is a joint offering Folies de Londres avec Les Girls and featuring danceuse/chanteuse La Palermo (Gynt) in La Danse d’Hibou (aka La Danse de Voiles). “Looks a bit continental, doesn’t it?” observes Charters. 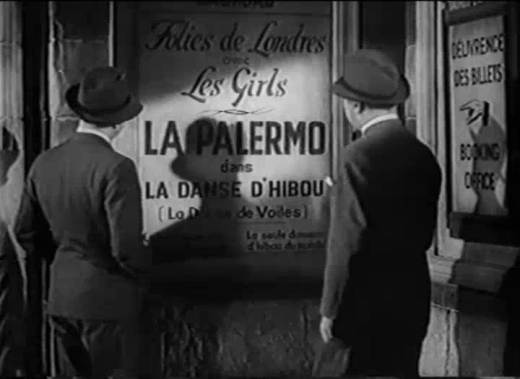 “Looks a bit continental, doesn’t it?”

By astonishing coincidence, this is precisely the dive whose cigar-smoking Nazi manager, Rossenger (McLeod), is tonight expecting two German agents to arrive from the US en route to the Fatherland. The cunning plan is to pass them secret information encoded on what seems to be just a gramophone records of songs sung by La Palermo herself—aka Ada Deering. Rossenger’s waiter Rakoff (Harvey) will be able to identify the two agents because they’ll order a particular combination of foods and drinks. Obviously, by another astonishing coincidence, this is exactly the combination that Charters and Caldicott order. (La Palermo is not best pleased to be a part of Rossenger’s scheme: “How can I think of my unveiling and serve the Fuehrer at the same time?”)

Meanwhile they Charters and Caldicott and watch the floor show, although Charters is horrified by how interested his sister’s husband-to-be is in some of it. But even his flinty heart is melted by the performance of La Palermo, even if he plays this down: “Hardly my type. Comparatively well dressed by local standards, though.” For his part, Caldicott shows he’s paying attention: “Have you noticed that she’s accidentally dropped one of her veils?” 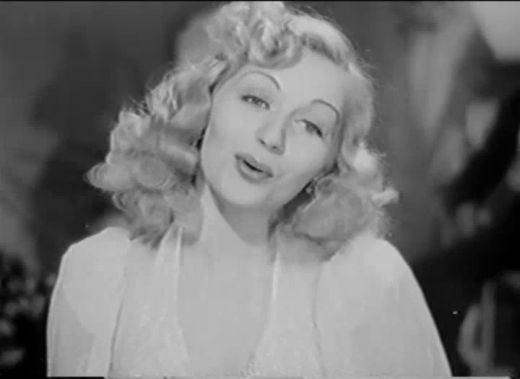 Just as our friends are leaving to catch the train to Istanbul, two Americans arrive in the club and order the specified repast. Realizing the error, Rossenger emplanes to Istanbul with La Palermo and Arab agent Ali (Sofaer). In Istanbul the Englishmen are met by another Arab agent, Klacken (Rebel), who persuades them to book in for the night at the Hotel Hamilton—in reality a private residence backing onto the Bosporus. As Klacken explains, there are oubliettes in the place: in days of old, when sultans tired of their wives, they could throw them into these secure in the knowledge that the Bosporus would bear the bodies away forever.

Of course, Chalmers and Caldicott are delighted to discover that La Palermo is singing in the hotel that night . . . especially as she’s apparently directing her rendition of a racy number seemingly titled “One Night of Heaven with You” straight toward the suited pair. It comes as no great surprise when she proves to be a double agent, doing her best to warn the Englishmen of their danger, and that it’s Ali who ends up in the river, not Chalmers or Caldicott. 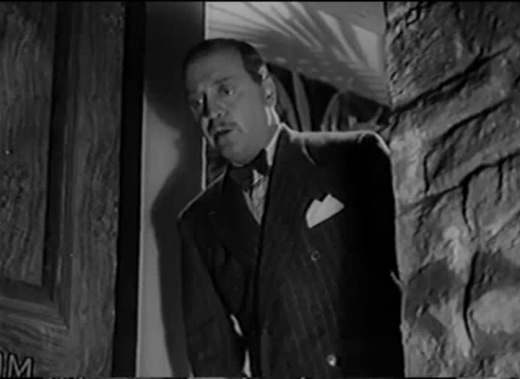 Chalmers (Basil Radford) realizes he’s just shoved someone into the Bosporos. An easy mistake to make. Could happen to anyone.

Followed by the usual gang, our pals escape Istanbul and reach the Hotel Magyar in Budapest. Soon after, Edith arrives in a foul mood. La Palermo tries to steal the gramophone record from the darkened room in which Caldicott sleeps; he catches her in the act, Charters and Edith storm in to find the two together, and there’s the predictable misunderstanding . . .

There are plenty more good lines to come, in the Wodehousian, often mildly (almost innocently) salacious style of the movie, as when the Magyar’s manager (de Pokorny) tries to help Caldicott over his complaint about the invasion of his room:

Manager: “If you could describe her—any clothes she wears—I might be able to help.”
Caldicott: “It’s rather difficult. You see, I’ve very rarely seen her with any clothes on.”

Or later, as the two Englishmen discuss how they could at last extricate themselves from their adventure:

Caldicott: “D’you suppose it’d be any good if we told our story to the British consul?”
Charters: “He’d never believe it.”
Caldicott: “We could leave out all the ridiculous bits.”
Charters: “There wouldn’t be much left.”

There’s also much more plot, mainly pivoting around a smarmy double agent called Captain Spanswick (Gardiner) . . . not the ex-Gloucestershire cricketer E.J.K. Spanswick, you understand, but an impostor, a non-cricketing Nazi—the two adjectives are roughly synonymous, so far as Charters and Caldicott are concerned—called Max Bauer, codenamed K.7., who’s only too happy to order their demise once he has his hands on the priceless record.

Edith (Noel Hood) is not best pleased with her brother and her fiancé.

The movie’s based on a BBC radio play likewise called Crook’s Tour (1941) by John Watt and Max Kester; presumably an in-joke is that there’s reference to an off-screen character called Kester. Among numerous uncredited cast members, Finlay Currie has a bit part as an unnamed tourist while the very lovely Patricia Medina has a slightly bigger role as the receptionist at the Hotel Magyar.

Clearly this movie, a comedy with an eye also to WWII propaganda directed at the US, is itself in no way noirish; really its only associational interest is the presence of Norwegian-born UK actress Gynt, who was an archetypal component of countless UK noir and noirish movies: the encyclopedia discusses DEAR MURDERER (1947), TAKE MY LIFE (1947), I’LL GET YOU FOR THIS (1950), FORTUNE IS A WOMAN (1957), MORNING CALL (1957; vt Strange Case of Dr. Manning) and BLUEBEARD’S TEN HONEYMOONS (1960). Elsewhere on this site to date there are The Arsenal Stadium Mystery (1939), The Ringer (1952) and Three Steps in the Dark (1953). She was, in short, the femme par excellence if not always the femme fatale of UK noir and noirish movies throughout the ’40s and ’50s, and even into the ’60s. It’s not hard to see why: she had a great screen presence and was able to conjure up—to use an old-fashioned term—immense charm.