Iowa lawyer David L. “Dave” Trask (Merrill) leaves his wife Janey (Westcott), plus their two daughters, to take a flight for LA to try to sort his head out; he can no longer live with her or the memory of the “little slip” she committed. He books himself on the plane under the name Joseph H. Collins so that Janey can’t track him down.

The weather’s appalling, and the flight suffers various delays. Dave becomes one of a disparate quartet of passengers thrown together by circumstances; the other three are

Eddie insists on showing everyone his candid shot of wife Marie (Bette Davis).

It’s Eddie who suggests the “Four Musketeers” should exchange contact details so they can stage reunions of their eventful flight together. But it isn’t to be, for the plane plows into the ground en route to its destination, leaving just three survivors.

Dave, who’s one of those three, determines to contact the families of the other Musketeers and try to do a little to put right some of the things that they confessed to him, before the crash, were wrong at home.

Bob Fortness, during the journey, retained Dave as a lawyer to represent him when he went to the DA to confess a crime. Five years ago, speeding to an emergency operation having had far too much to drink, Bob crashed his car, killing his friend and colleague Tim Brooks (an uncredited Beaumont) and two others; afterwards Bob lied that Tim had been the driver and his wife Claire (Straight, in her first screen role) covered his lie with one of her own. Ever since then he’s been drinking hard to compensate for the fact that, he’s sure, his beloved Claire must have lost all respect for him. Dave is able to convey to Claire that before his death her husband had decided to do the decent thing at last and admit his guilt, and is also able to reconcile Claire with her teenaged son Jerry (Donaldson), who has been blaming his mother for Bob’s drinking and death.

Claire (Beatrice Straight) tries to put on a brave face.

Binky was heading home to husband Mike (Stevens) after a year’s absence during which she’d been trying and failing to build her own career. Mike, a crooner, works at the Club Carr with his mother, the old vaudeville star and bitch on wheels Sallie Carr (Varden). Sallie tells Dave her own, quite clearly fictional version of Binky’s departure for New York, with herself as a saintly, put-upon mother-in-law. Dave sees through this as the nonsense it is, so lies in return that Binky had just nailed down Mary Martin’s part in the Broadway production of South Pacific, to replace her when the star went to open the London production; moreover, Binky managed to get Sallie a part in the show as well. Afterwards Mike thanks Dave for the lie, for having given Binky the showbiz success she never achieved in life. 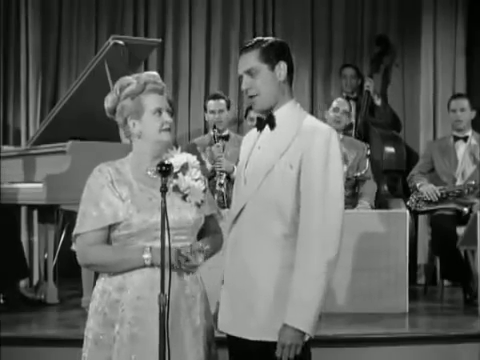 Finally Dave visits Eddie’s widow Marie (Davis, who was at the time Merrill’s wife). During the night before the crash, Eddie pridefully showed around a photo of his babe of a wife clad in her swimsuit. What he didn’t mention was that she’s paralyzed from the waist down after a swimming accident incurred at a time when she’d run away from him with a younger, more refined lover, Marty Nelson (Stevens). Having learned the truth from Dr. Fernwood (an uncredited Powers), Nelson headed for the hills, leaving Marie in intensive care. It was there that Eddie found her, to declare his undying love for her and to take her home. Whatever other people thought of Eddie, Marie explains to Dave while still knitting what appears to be a last sock for her husband—his loudness, his tastelessness, his general ghastliness—to her he was the rock upon which her life was built.

Dave reads the obvious moral of Marie’s tale and phones Janey to ask if she’ll have him if he comes home . . .

Phone Call from a Stranger is one of a set of Hollywood movies that lie somewhere between an anthology and a more straightforward narrative—another is The Bad and the Beautiful (1952), which assembled an equally stellar cast. We’re told the stories of Bob’s fatal crash and its aftermath and of Marie’s adulterous escapade and its aftermath through extended flashbacks, while Sallie Carr’s lie and Dave’s retaliatory lie are treated similarly. The latter two pseudo-flashbacks represent the only two sequences where the movie aims directly for laughs, treating both accounts as the tall tales they are. There are other moments of humor in the movie (for example, we’re given a list of the places where Marie and the despicable Nelson consummate their adultery: the Toddle Inn, the Crawl Inn, the Stagger Inn, the Meander Inn, the Hop Inn), but these shafts of sunlight are shortlived amid the general gloom.

The movie does manage to be genuinely moving, especially in its final act, as the bedridden Marie (even though Davis hams up the role a bit) manipulates Dave into making the right decision, that he should be “strong enough”, if he really loves Janey, to get past her affair. Some have accused the movie of being designed a little too clinically to tug on the heart strings, and this is undoubtedly true as well. A more noirish treatment of the theme is Identity Unknown (1945). 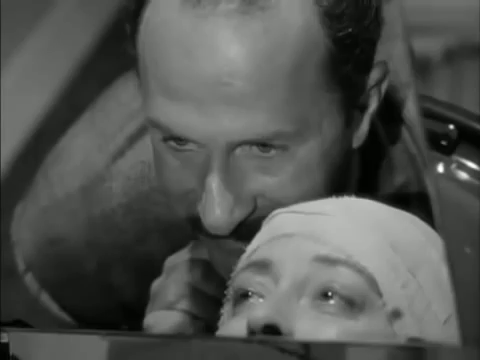 Eddie (Keenan Wynn) was always there for Marie (Bette Davis).

Johnson’s screenplay for Phone Call from a Stranger won the International Award at the 1952 Venice Film Festival, and Negulesco was nominated for the Golden Lion at the same event, but otherwise the movie went unrecognized by the various awards committees.

On Amazon.com: Phone Call from a Stranger