One never expected masterpieces from Merton Park, but their cut-price fillers did have their charms—they offered an enjoyable way to spend an hour or so even if they tended to be forgotten within minutes of the A-feature starting. The movies in the long EDGAR WALLACE MYSTERIES series (1960–64) were typical of the studio’s output; even at the time it was the series’ theme tune (written by Michael Carr) that really stuck in the mind, far less so the movies themselves. The Floating Dutchman is one of the better Merton Park offerings, and benefits from having the under-recognized Sydney Tafler in a principal role, plus Arnold Marlé and Ian Wilson among the support. And it’s certainly more memorable than many a Merton Park item: I must have been a child when I last saw the movie, because I can remember being devastated by a particular incident toward the end, yet the very fact that, decades later, I could remember this and occasional other incidents—and the performances of Marlé and Wilson—is testament in itself. 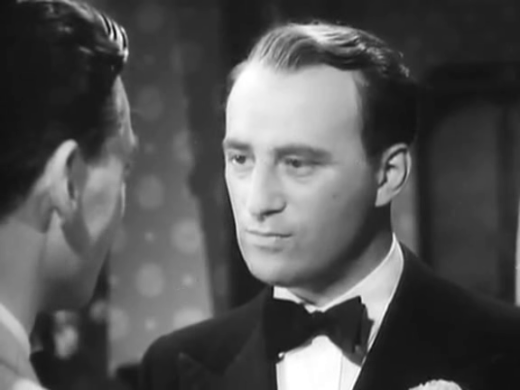 A body is fished out of the Thames. The cops, as we learn when Inspector Cathie (Morton) briefs his boss, Gwynn (Raglan), swiftly discover that the man died from a bash on the head, not from drowning, and, thanks to an inquiry from the Dutch police, that he was a shady jeweler called Martinus Vandermeer. On the body was a card from the nightclub Skinner’s, with, scrawled on the back, the telephone number of notorious fence Otto Krohner (Marlé). By following up on this link, Cathie believes, the Yard might at last nail the club’s owner, Victor Skinner (Tafler), a criminal kingpin against whom the cops have never been able to make a charge stick.

Cathie seconds Alexander “Alex” James (Walsh), a cop who’s just returned from a two-year assignment in Canada, and instructs him to weasel his way into Victor’s organization, using if need be, for verisimilitude, the identity of a recently emigrated crook, Alan Trevor. When Alex goes to sit in the bar at Skinner’s, he soon makes contact not just with Victor but with one of the taxi dancers, Rose “Rosie” Reid (Germaine). He signals his supposed crookery to Victor by lighting the man’s cigarette with a distinctive cigarette lighter that’s notoriously “hot”, then inveigles himself into Rose’s life by helping her when her brother Phillip (Blomfield), a guitarist in the band at Skinner’s, collapses mid-performance and has to be gotten home.

Phillip is having not just booze problems; he has also “borrowed” a cigarette case from Victor’s latest haul, and both Victor and the fence Otto have noticed its absence. Victor makes it clear to his psycho sidekick Snow White (Verney, in splendidly sinister form) that Phillip has become too much of a risk, and must be got rid of. We never do find out exactly what happens to Phillip; he just sort of disappears from the plot and, while Rose expresses brief perplexity as to his whereabouts, even she doesn’t seem overwhelmingly perturbed. 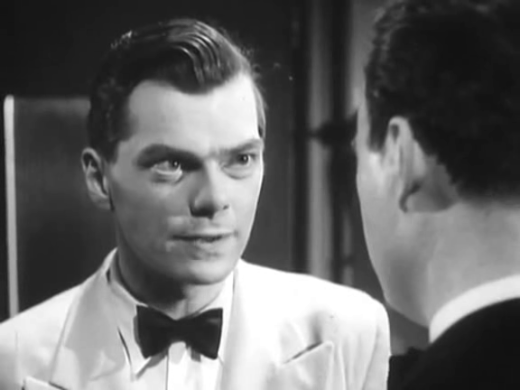 She has other things on her mind. She and Alex are falling in love, which is welcome to her; less so are Snow White’s insistent attentions. She makes it plain to Snow White that he revolts her, yet whenever she’s around he’s all over her.

Thanks to the good work of Alex and a uniformed copper, PC 276 (Midwood), Inspector Cathie and his sidekick Collis (Bentley) discover how Victor’s gang are pulling off their jewel burglaries. Roffo, the head waiter of a swanky restaurant, is giving Victor the nod when various glittering types are having parties there, so that Victor can be confident of finding their homes empty. The latest tipoff concerns the apartment of socialite Hattie Mason, so round to the woman’s flat go Victor, Snow White and Victor’s new buddy Alex. Because of the shortness of the notice, Alex must ask Rose to phone Mr. Herring (Wilson)—the Charing Cross Road antiquarian bookseller who serves as the undercover Alex’s go-between with his cop colleagues—with a message for Cathie . . . whom she assumes, somewhat miffedly, is a girl.

The cops swoop on Hattie Mason’s flat, catching Victor and, as it were, Alex. Snow White escapes, though, and when he goes back to Skinner’s soon finds out from Harry the barman (Olaff) about the phonecall Rose made. It’s the work of moments to abduct Rose, and . . .

Some of the dialogue—presumably reproduced from the novel—has a sort of genteel faux-hardboiledness that’s priceless; no need for British cargo-cultish “noir” writers like James Hadley Chase and Peter Cheyney to look to their laurels when you have lines like “Birds of a feather should stick together, otherwise they might lose their pants” to bandy. I waited for “What’s a girl like you doing in a joint like Skinner’s?” to come along, and sure enough it did.

Alex (Dermot Walsh) and Rose (Mary Germaine): “What’s a girl like you doing in a joint like Skinner’s?”

Tafler is admirable as the suave crook—you could imagine lending him a fiver without a second thought and then never getting it back—and Marlé offers a truly wonderful performance as the sweet-natured, cat-loving, almost honorable fence Otto, but the most interesting of the movie’s characters is Verney’s Snow White. The man clearly has a serious case of the hots for Rose and seeks to possess her (in every sense; he talks of proprietary rights over her); when Alex moves in and captures her affections, Snow White’s jealousy runs riot. Yet he appears even more jealous over what he perceives as Alex’s purloining of Victor’s affections. There seems definitely a homoerotic undercurrent in the relationship between Snow White and Victor, certainly on Snow White’s side. This makes the final, brilliantly engineered twist in the movie’s tale yet more anguishing for the hoodlum.

Nicolas Bentley, who wrote the book upon which this was based and plays the role of Cathie’s subordinate Collis, was of course less well known for his novels than for his illustration work, such as his defining set of illustrations for T.S. Eliot’s Old Possum’s Book of Practical Cats (1939). I had the privilege of very briefly making his acquaintance when, towards the end of his life, he supplied illustrations for Richard Ingrams’s Beachcomber: The Works of J.B. Morton (1977), a book on which I did some editorial work.

Author and illustrator Nicolas Bentley has a supporting role as Sergeant Collis.

The movie’s not on Amazon, but you can find various editions of Bentley’s novel there: The Floating Dutchman.

This entry is part of the 1952 book (and movie) event mounted by Rich Westwood’s Past Offences blog.