The movie upon which was based the popular US fringe film noir CROSSROADS (1942) dir Jack Conway, with William Powell, Hedy Lamarr, Claire Trevor and Basil Rathbone.

A man named Leduc (Palau) attempts to blackmail prominent industrialist Roger de Vetheuil (Vanel) with the claim that de Vetheuil is really a lowlife hoodlum called Jean Pelletier, who swapped identities with the heir during the Battle of the Somme. De Vetheuil cooperates with the flics to have Leduc arrested. However, one of the newspapers gets hold of the story and splashes it far and wide. Aided and abetted by his lawyer, Pierre Alexandre (Bovério), de Vetheuil sues the paper.

Yet things soon start to look grim for his case. It emerges that, because of injuries received while serving at the Somme, he suffered complete amnesia; were it not for the fact that his childhood sweetheart, now wife, Anna (Fedor), tracked him down and identified him, he would have no knowledge of his earlier life. Michèle Allain (Prim), currently a successful nightclub owner but once the floozy of Jean Pelletier during the early years of the war, appears in court and tearfully testifies that “de Vetheuil” is indeed her former lover. The Président (judge) of the court (Amiot) coaxes out of her the recollection that her Jean was left-handed—as, sure enough, is de Vetheuil.

But then de Vetheuil’s bacon is saved by the appearance of the bonhomie-laden Lucien Sarroux (Berry), who tells a convincing tale of how, in wartime military hospital, he befriended the dying Jean Pelletier, and indeed watched him die. De Vetheuil wins his case, and he and Anna plan a foreign holiday to celebrate.

Sarroux (Jules Berry) comes to collect for his false testimony.

Those plans go bye-bye when Sarroux turns up at the house and tells de Vetheuil that he was perjuring himself—that de Vetheuil really is Pelletier, whom Sarroux knew back in the old days. It’s Sarroux’s turn to try a little blackmail. De Vetheuil throws him out, but as he goes Sarroux whistles a catchy little tune that de Vetheuil finds oddly familiar . . . Moreover, Sarroux leaves behind a note with the address of Madame Pelletier (Geniat), Jean’s mother.

De Vetheuil goes to visit the very admirable old woman, who concedes there’s a physical similarity between him and Jean but insists they’re not one and the same person; a chance encounter with a little girl on the tenement stairs afterwards, however, persuades de Vetheuil that Mme Pelletier was lying: that he is indeed her son and that, through love, she’s hiding the truth to protect him from his past. Her grief, which she allows to express itself only after she has closed the door behind him, provides one of the emotional highpoints of the movie.

A visit to Michèle at her nightclub further convinces de Vetheuil that he is indeed Pelletier. It’s clear that, though Sarroux is now her lover, she is still in love with her Jean; during their long and amicable, almost loverly conversation she recalls all kinds of small details (such as the one about him socking the bistro owner who pinched her derriere) that, while de Vetheuil cannot directly remember them, hold for him more than an echo of truth. 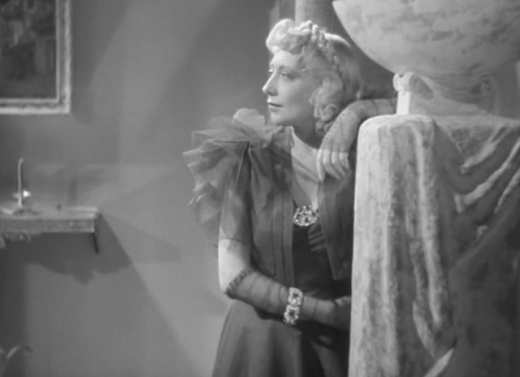 Michèle (Suzy Prim) is full of both love and dread on seeing Jean again.

Against lawyer Pierre’s advice, de Vetheuil determines to do the honest thing—to turn himself, as Pelletier, in to the cops to answer for his old crimes, to renounce all his interests in the family firm, and to permit Anna to divorce him because the man she married is not the man she thought he was. (Anna, of course, refuses: she cares nothing for his past; he’s the husband she loves.)

But then the de Vetheuils’ 10-year-old son Paul (Claudio), who’s being bullied at school because his vile little classmates accuse him of being a gangster’s son, attempts to kill himself by jumping into the Seine. The man whom by now we know certainly (as does he) to be Pelletier decides that, for the sake of his son, he’ll prove himself to be really de Vetheuil. His first step is to agree to pay Sarroux 500,000 francs, on condition the man leaves France and never returns. When Sarroux breaks it to de Vetheuil that he plans to come back again and again for more and more, de Vetheuil sets up the blackmailer for an untimely demise . . . and it’s at this point, had we had any remaining doubts, that we know he truly is Pelletier: the ruthlessness comes easily to the surface. 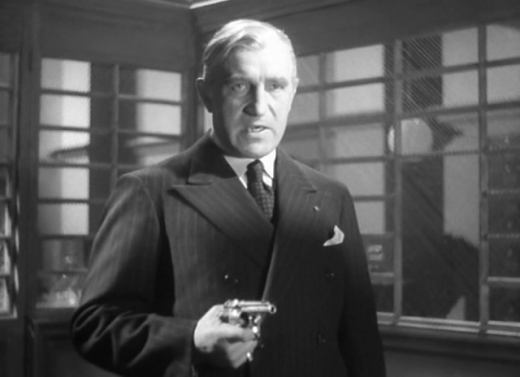 There’s a logical flaw at the heart of the movie (Sarroux’s very cocky that he could destroy de Vetheuil, but de Vetheuil could with just a word have Sarroux jailed for perjury), but otherwise this is a fine piece of work. The Hollywood remake, through its casting alone, decided to make the piece lighter-weight than the original. Here, the moment that de Vetheuil’s mask comes off and we realize he has no compunction about killing Sarroux in cold blood, we realize that what was already being played as a pretty somber drama is in fact something bleaker than that; the tour de force performance from Vanel ensures we cannot treat the movie lightly. He’s very ably supported by Berry, Prim and a superb Geniat.

It’s yer symbolism, see? Michèle’s dead, and guess where her soul is headed . . .