Ann (Luana Patten) and Jamie (Steven Marlo): a campfire in the desert.

Drunk and enraged, no-good James “Jamie” Forbes (Marlo) beats to death the oil-rig boss, Mr. Kingston (Guth), who kicked his transistor radio to bits and fired him, then steals Kingston’s wallet, dumps the corpse into the dead man’s own oil well, and goes on the run.

Benjie (Tom Selden) persuades Ann (Luana Patten) they should run away and marry.

When his motorcycle breaks down (or doesn’t: the plot’s a little confused here), Jamie hooks up with Benjie Whitney (Selden) and Ann Howell (Patten), a young couple who’re eloping to Tijuana to get married even though she’s aged just 17. En route to Mexico, as they pause at a diner/garage, Jamie kills again, his victim this time being a blonde (Stapp) who resisted his advances. 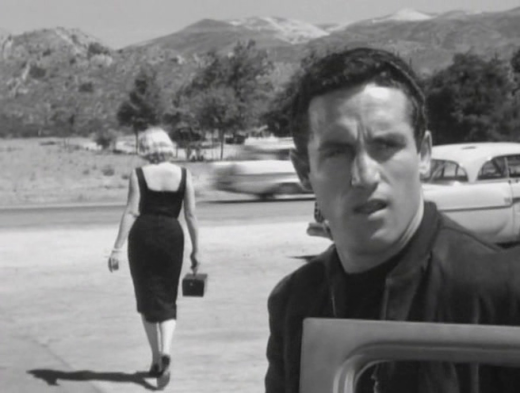 When a dame sashays like that, Jamie’s first thought is naturally to check out her chassis — the chassis of her car, that is.

As the trio nears the border, the kids try to ditch their passenger, but Jamie pulls his knife on them and demands they divert to Tecate . . . Camped out in the Mexican desert, Jamie explains to the other two what his plans are for the future:

We’re going to get married. Not the three of us. Just you [points the knife at Ann] and me. Now, I could tell from quite a ways back she’s been giving me the big eye—bet you didn’t know that, huh, Benjie boy? I’m Mister In. You’re Mister Out.

In pursuit are the cops, in the shape of Detectives Dave Mahalik (Sheridan) and Norm Britt (Ed Nelson), as well as journalist Tony (Chandler), who supposedly has a knack for sniffing out mayhem. It’s Tony who, after Jamie has—as one would expect—gone to his maker and his young captives have been rescued intact, speculates that in another ten or twenty years perhaps society will be better able to deal with psychos like Jamie, helping them rather than simply catching or killing them. Dave Mahalik knows better—”That’s the trouble with us cops, Tony. We’re just born cynics”—although whether the cynicism is about the permanence of human evil or society’s lack of the will to help itself is left open to question.

Marlo is really very good as the superficially charming psycho whose easy ingratiation fools those around him until, usually, too late; the character is completely credible, almost sympathetic despite his willingness to kill on the slightest whim. His philosophy of living entirely for the moment is simplistic, but it’s quite well worked through in the screenplay, giving the movie a shade of additional depth that one doesn’t expect in the average juvenile-delinquency flick. The other characters are less fully realized, as if from central casting, although Sheridan does a good turn as the cop who, despite his world-weariness, is unafraid to listen to the voice of his own compassion. 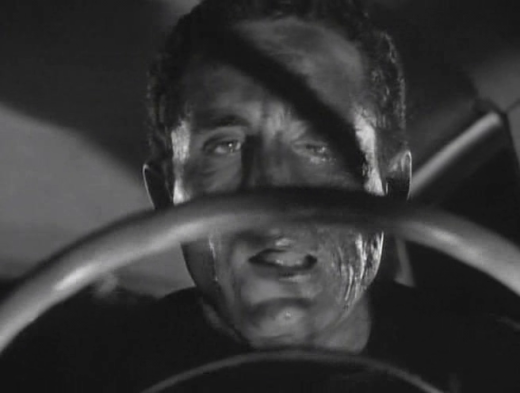 Bring on the traditional hail of bullets.

One of the commenters at The Blackboard complained that this movie should have been included in my A Comprehensive Encyclopedia of Film Noir, and on balance I think that they’re probably right; I plead ignorance in mitigation. My thanks to that critic.

A case for Apostrophe Watch.