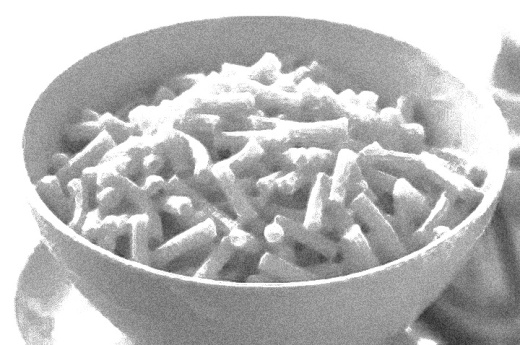 The barrier from behind which Dolores de la Fromage (Deburna Dranville) would nightly leap, to the delight of her audiences at The Blue Fingers.

After being awarded a Blue Ribbon with Distinction for his heroic service in Europe during WWII, Marine Sergeant Rick Hamfist (Malone) returns to his Iowa hometown in hopes of settling down to raise vultures on the old family homestead and marry his boyhood sweetheart Angelica Cake (Dranville). Alas, she has metamorphosed from the demure home economics major he used to know and love and is now the renowned chanteuse and “hostess” Dolores de la Fromage, whose athletic feats and lack of inhibition have rendered the small-time niterie owned by Higgs Bustard (Rubinstein), The Blue Fingers, a magnet for funlovers from all over Iowa and even beyond. Worse still, she’s planning to marry the elderly Bustard.

It was not for nothing that Rick gained his wartime decoration. After a weekend drowning his sorrows, he’s picked off the ground—literally—by a sympathetic seamstress, Jennifer Meadowgrass (Blake), who came to town during his absence and has had difficulty, as a newcomer, gaining acceptance among the locals, many of whom make coarse needlepoint jokes behind her back. She tells him that, despite Dolores’s engagement to Bustard and the chanteuse’s frequent public declarations of love for the “repellent old lecher who’s twice her age and hasn’t changed his underwear since the first Roosevelt” (as Jennifer eloquently describes him in a monologue full of Dylan Thomasian cadence), the “floozy” has on many an occasion been seen canoodling in the alley behind The Blue Fingers with hunky Gig Mottram (Kebab), a former bouncer and heavyweight boxer.

It soon becomes obvious to Rick and Jennifer, who’re slowly, tentatively but inevitably growing closer to each other and do a lot of slo-mo walking around in fields together, that Dolores and Gig are plotting for Dolores to marry the old curmudgeon and then whack him for his money.

When Jennifer finds out that Rick has been sneaking off while she’s been at her Thursday Quilting Club to catch Dolores’s act at The Blue Fingers, relations between them become strained. Luckily her sweet septuagenarian mom, Phyllis “Firecracker” Meadowgrass (Morrison), is on hand with her wiseacre country lore to heal the rift.

But then Bustard is murdered and Rick finds that he, not Dolores and Gig, is the prime suspect in the eyes of grizzled Sheriff Dan McGraw (Donnell). To make matters worse, on the night of Bustard’s death Rick had a confusing dream in which he seemed to see himself shooting Bustard with the very same bullet that the sheriff has now dug out of the corpse’s heart. To make matters even worse, he’s tried, convicted and sentenced to hang. And, to make matters even worse than that, Jennifer visits him in prison to tell him that it’s all over between them and to give him an embroidered cushion. It doesn’t take long for Rick to work out that he’s been made a sap of . . . but by whom?

FSM was one of the shorter-lived Poverty Row studios, its staff comprising moviemakers who’d failed, for one reason or another, to make the grade at Monogram or PRC. Director Meyer was an exception; in fact, it’s uncertain why he took the job, which he completed over a long weekend during the shooting of his quintessential zeitgeist movie If It Ain’t Bust, Don’t Fix It (1959), but feasibly it might simply have been to explore his voracious inventiveness in what was for him a new medium, film noir—it certainly wasn’t, this being FSM, the money. There are a few signs of budget constraints—during the famous “dancing pajamas” sequence, one of Dranville’s legs falls off—but overall this is a tightly made, economically cynical outing. It was to be Dranville’s final big-screen role before the misguided science-fiction opus Bikini Girls on Mars (1964), in which she played the resentful Mother Superior. Thereafter came the long descent through TV sitcoms, soap operas, substance abuse and celebrity quiz shows. For a star who’d begun in the silents, she’d done remarkably well.

The Big Noodle is interesting for its music, too. In support of the lip-synching Dranville (Callas provided Dolores’s singing voice), the Vienna Boys Choir render two numbers at The Blue Fingers with the kind of elan you’d expect: “Jeez! You Joy of Man’s Desiring” and the specially written George Gershwin piece “Midnight at The Blue Fingers.”

What truly stamps The Big Noodle into the memory, however, is Bunficht’s cinematography, which makes maximal utilization of light and shadow (primarily shadow), swooping pans that have a sort of pinballic grace, some extraordinary camera angles (at one stage Dranville briefly hospitalized him), and eight-millimeter stock. His efforts brought him a coveted Jour Froid en Enfer nomination at Deauville.

Props were in short supply in most of the FSM offerings, but Pauletta Blake (as small-town seamstress Jennifer Meadowgrass) showed herself well able to adapt to circumstances.

It was of The Big Noodle that the French maestro Claude Chabrol observed, “This is the kind of movie that Donald McGill might have made had Donald McGill ever delved into film noir.” It’s that good.