Someone murders successful financier Robert Norman (Mallalieu) in the library of his riverside home, River House. Inspector Philip Winton (Sydney) of the local constabulary is called in to investigate, which he does with Sergeant “Mac” McKay (Sim) alongside him as his obsequious assistant. It soon emerges that five years ago, after Norman had harmed four of his friends with bad financial advice, he gave each of them cash by way of compensation; the five agreed on The Pact, a sort of faux-tontine whereby they all—or at least all the survivors—would assemble here at an agreed date and share equally among them the wealth they’d earned in the intervening period. With Norman now dead, each of the remaining four will gain one-quarter of his not inconsiderable fortune. That agreed date is now: The Pact has until midnight tomorrow to run . . .

Two of those four have already arrived and are staying in River House: writer Hubert Perrin (Tate) and the rather retiring Henry Sanders (Fleming). Soon a third turns up, the wastrel William Gregg (Lewis); it’s said that the dead man had recently wearied of Gregg’s endless requests for “loans” and had cut off the money supply. Finally the fourth appears, Alfred Jerome (Helmore), freshly arrived from the Far East; he’s plainly terrified, displaying on his shoulder the bullet graze that he apparently received last night when someone took a potshot at him. As he talks about this in Norman’s library to Sanders and Claire Haines (Gunn), a headstrong young journalist who has butted into the case and keeps returning despite the best efforts of Philip and Mac to eject her, he moves nervously to the French windows to close them and is promptly shot down from the darkened garden beyond.

A shot rings out and Jerome (Tom Helmore) clutches his chest . . .

Sanders runs for help. When he returns he finds Claire unconscious in a chair and Jerome’s body gone. Later Sanders identifies a body fished out of the river as Jerome’s: it bears the graze of a bullet as well as a distinctive tattoo Sanders noticed when Jerome was demonstrating that wound. And the following morning, as Gregg stands chatting with Mac on the doorstep of River House, an unseen assailant shoots him dead through the letterbox. 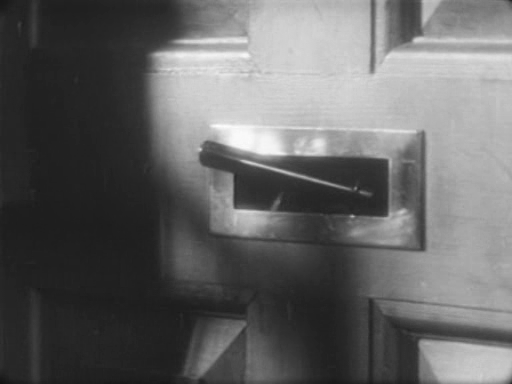 . . . and Gregg (Martin Lewis) is done for as a mysterious assailant plugs him through the letterbox!

By now Sanders and Perrin, the last two surviving members of The Pact, are becoming understandably nervous. Can they make it alive to midnight? Can Inspector Winton catch the murderer by then, or will Scotland Yard be called in so that he’s forced to resign from the Force in protest? Will Claire Haines be not just reinstated in the job at the Evening Gazette from which editor Gregory (uncredited) has fired her but also promoted to being full-time crime reporter? Will the audience be able to hear a word various characters are whispering to each other in the lead-up to the climactic scene, or will the sound editor succeed in keeping us all ignorant of what’s going on? Will Winton realize he’s in love with Claire? (Huh? to the last: in the movie’s closing seconds he suddenly announces he’s going to marry her, and we stare at the screen aghast at what must have been going through the moviemakers’ minds as they not just contemplated this plotting quicksand but then jumped right into it.) The most burning question of all is why we aren’t a whole lot more interested in the answers to any of these questions.

Perhaps the most memorable part of this movie is watching Sim essaying a (moderately) straight role. It’s as if there’s a battle going on between what the actor’s supposed to be doing and his natural comic genius. Clearly the cinematographer and the editor were on the side of the comic genius, because every now and then there’s a little piece of comedy “business” that has no real place in the movie but which the camera dwells just long enough on Sim to catch. The “humorous” routine that is supposed to be there, near the start of the movie, involves not Sim but Sydney and an inconsolable small boy who has lost his mother; perhaps the intention of this sequence was to show us that Winton isn’t accustomed to the highest-profile of cases, but it comes across as just an embarrassment—almost as embarrassing as Gunn’s (presumably affected) aristocratic accent, which you could kite with a knaife.

One actor who does come out of this with credit is Davis, as Norman’s sweet but scatterbrained elderly housekeeper Mrs. Harris. Unfortunately, after a while she announces she can’t stand living in River House any longer and goes off to stay with her sister, never to be seen by us again.

The original novel was Belgian author Steeman’s first featuring series character Inspector Wens (Winton = Wens). Wens is not the finest of literary creations—he lacks the aura of a Maigret, for example—but, even so, it’s a bit sad to see him being dissolved into a standard UK rentacop for what, in all honesty, isn’t even up to standard for a UK mystery for its era.

On Amazon.com: THE RIVERSIDE MURDER