There are many peculiarities about the household. For one, the servants are barred from entering the main portion of the house after 8pm, at which time the two sinister footmen Gilder (Emerton) and Brooks (Hayes) take over. For another, the room in which the late Lord Lebanon spent his last years of illness and eventually died is kept permanently locked. A frequent visitor from London is the sinister physician Dr. Lester Charles Amersham (Aylmer), who seems to have some hold over Lady Lebanon and certainly has been extracting large sums of money from her. And someone has just put a bolt on the outside of the bedroom door of Isla Crane—who’s in consequence the (understandably) frightened lady of the title. 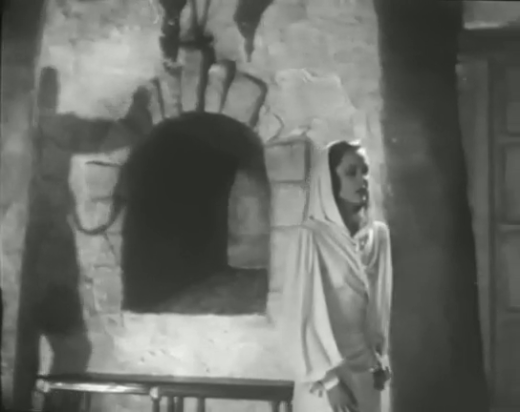 Lady Lebanon is urgently intent that her son marry Isla pronto in order to continue the line. Unfortunately for her plans, while Willie and Isla are very fond of each other, they are so in a sibling rather than romantic fashion; besides, Isla falls hard for Richard Ferraby (Barr), an architect brought in by Lady Lebanon to plan the restoration of Mark’s Priory.

On the night of a fancy dress party nearby, Isla and Richard make pretty plain to each other how they feel. Also doing some romancing is the aptly named family chauffeur Studd (Warwick), the object of his affections being the extremely lovely wife (Scott) of the estate’s surly gamekeeper, Jim Tilling (Thatcher); she and Studd plan to run away with each other.

When, later that night, Studd is strangled with an Indian scarf, Tilling—who saw his wife and the chauffeur kissing passionately in the garden outside the party—is briefly Suspect #1 of Scotland Yard’s Detective Inspector William Tanner (Merritt) and his over-cocky sidekick Sergeant Totty (Shiner). But then their attention shifts to Amersham, whose career in India as part of the army’s medical corps proves to have been checkered and to have ended with his dishonorable discharge when he was caught forging a check; Studd knew him in those days, and might have been preparing to blackmail him.

When a search of Amersham’s flat reveals a secret drawer filled with Indian scarves, the case seems cut and dried . . . but only briefly so, because now Amersham is found murdered on the Mark’s Priory estate, likewise strangled using an Indian scarf. This scarf, like the one used earlier, disappears before the cops can take a proper look at it—only this time we see what happens to it: Lady Lebanon chucks it on the fire.

From this point onward it’s pretty obvious who the killer is, but there are plenty of other surprises in store, among them Lady Lebanon’s true marital status and what really happened in India.

Bearing in mind that this movie was made during the early period of WWII, the production standards are remarkably high, and the central cast of Goring, Dudley Ward and Haye work hard to maintain a sense of conviction that carries the piece past a couple of plot frailties; in especial, the chemistry between Goring and Dudley Ward as romantically disinclined friends from childhood is very good—better, in fact, than that between Dudley Ward and Barr, even though those two portray perfectly adequately a couple plummeting into love. Among the more minor characters, Warwick is good as the amiable but not necessarily entirely trustworthy chauffeur Studd; he went on to have a lengthy career in movies and especially TV, being perhaps best remembered for his rendition of Inspector Landon in the TV series Police Surgeon (1960). Goring, of course, would become one of the UK’s more distinguished actors.

There are quite a number of uncredited characters. Notable among these are Thatcher and Scott as the couple whose evidently unhappy marriage Studd is planning to break up. Scott (not to be confused, of course, with noir icon Lizabeth Scott) is sometimes listed as being the mother of directors Ridley and Tony Scott, but as far as I can ascertain this is a confusion. 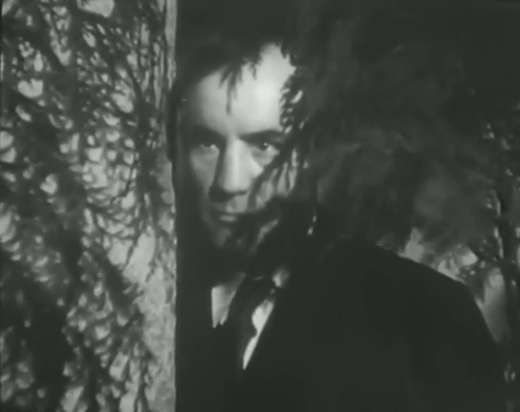 The jealous Tilling spies as his wife embraces the chauffeur.

The screenplay has some good moments. When the overconfident Sergeant Totty tells his superior officer Tanner that “I’m going to keep my ears open”, the latter responds immediately with: “Of course you’ll keep your ears open. Nature made them that way.” Not so humorously—not humorously at all, in fact—Lady Lebanon reveals at the end her true priorities, and how little she values other human beings: “A thousand years of being great, gone out like a candle in the wind.”

There are distinct similarities between this movie and The Shadow (1933).