In Le Havre, wastrel siblings Michel (Saury) and Catherine Mougins (Demongeot) have run the family shipping business into the ground since the death of their magnate father. A friend of Michel’s suggests to him, as if it were a new idea, the old shipping-insurance scam: fill one of the company’s ships with a cargo of sawdust in the guise of expensive Ceylon tea, scupper the ship, blame an old WWII mine for the sinking, and claim a huge sum from the insurance company. The shipping firm owns a suitable hulk, the Volturnia, now docked in Hamburg. 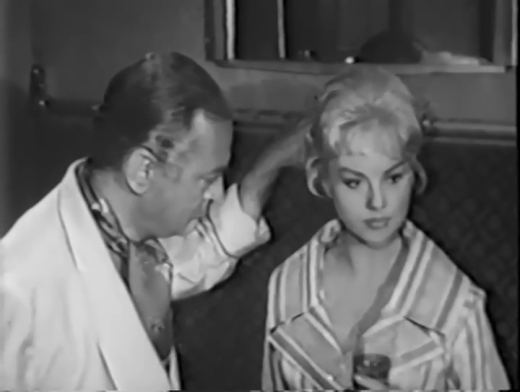 Catherine ropes in her much older lover Éric Muller (Jürgens), a retired sea captain trying to make it big in business, and in turn he ropes in his Hamburg pal Mathias (Sorano), a specialist in criminal bombings. Together Éric and Mathias plant a time bomb in the bowels of the vessel; before going ashore, Mathias announces that nothing can now stop the bomb going off at 3am.

The ship sets sail for the planned detonation area, the vicinity of an old minefield (so as to make the “accident” seem plausible), with Éric as skipper, and needless to say there are problems. They lose several hours because of a blocked lock outside Hamburg; despite the objections of chief engineer Julien Aubriant (Gobin), an old friend of Éric’s, that the old ship’s boilers might blow, Éric insists on keeping full steam ahead in order to try to catch up for lost time. When an emergency signal is picked up from a fishing boat that has caught fire, Éric refuses to detour to offer assistance—overruling an appalled First Mate Laurent (Loyer). The fact that his bizarre actions are going to look pretty fishy after the “accident” seems not to occur to Éric; even beforehand, they’re becoming too much for Laurent.

Meanwhile, ashore, Michel has spent a chunk of the proceeds in advance on a natty little Mercedes sportscar, while Catherine is beginning to crumble under the pressure: “We’ve all become monsters! We’re monsters!” she wails in a moment of pungent overacting.

And then, not long before the bomb is due to go off, the Volturnia‘s starboard boiler blows. It’s at this point that the interest really picks up, as the crew struggle to free a stoker—the giant Yugoslav nicknamed Chewing-gum (Hahn)—who’s been trapped by falling debris; unfortunately, the movie’s some 70 minutes old by this time. Thereafter, it’s as if the makers ran out of money, because most of the remaining significant deeds—including, not least, the disarming and disposal of the bomb!—are performed offscreen, and we’re left in the dark as to how they were achieved. All in all, it’s not really surprising that this movie’s as obscure as it is.