After newsreel photographer Phil Sparr (Baxter) and his sidekick Roger (Faye) shoot a fashion sequence outside the Fifth National Bank on NYC’s Madison Square, the film they’ve shot is suddenly in heavy demand. Criminal gang-leader Joe Gibbons (Huston), a one-time actor who had to switch professions because of his drinking, sends a courier to try to pilfer it; when the man fails, Gibbons beats him ruthlessly with his belt. Gibbons next sends his sidekick Beck (Collins) to beg for the film on the pretext that Phil captured Beck in the company of a floozy not his wife. Meanwhile, fresh-faced journalist Peggy Lane (Gilmore) from Snap magazine is attempting to interview Phil. 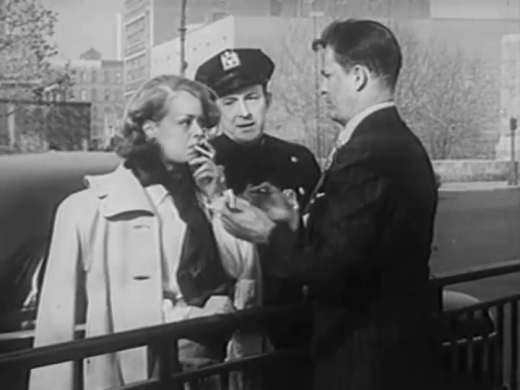 Phil (Baxter) gives near-femme fatale Peggy (Gilmore) a cigarette as the cops prepare to take her away.

Phil’s boss Harry Avery (Smith), examining the relevant frames, realizes the reason people are after it has nothing to do with Beck or his floozy: Phil inadvertently captured the image of wanted Nazi war criminal Kurt “The Butcher” Bauer (Kollmar) leaving the bank. (One could thus regard the movie, in its setup at least, as a very distant ancestor of much later pieces like BLOWUP [1966] and BLOW OUT [1981].) As we in the audience already know, Bauer—under the alias “Martin Beaumont”—and his henchman Fredericks (Wyler) were arranging a massive cash withdrawal; they’ve hired Gibbons’s gang to get the incriminating celluloid out of circulation by fair means or foul.

When Sergeant Riley of the NYPD turns up at the Argus Newsreel offices ready to escort Phil downtown with the footage, we know almost at once that something’s afoot; “Riley” is Gibbons. Phil, unsuspecting, gives Peggy the key to his apartment and tells her he’ll join her there after he’s done with the cops. It’s soon as obvious to Phil as it is to us that Riley and his runtish psychopathic crony Hal (Phillips) are not cops but crooks. For reasons that are somewhat opaque, they take him aboard the Staten Island Ferry; he cleverly draws a ferryman’s attention by smoking in a No Smoking area, then equally cleverly escapes.

Once home, he releases Peggy from the closet in which, she explains, Gibbons’s thugs locked her. Together they go back to the Argus offices to discover that Harry Avery has apparently suicided; in fact, as they soon learn from Police Chief Lonoghan (Manson), Harry’s alive, the man who fell from Harry’s high office window being that of a thug who attacked him. There are further shenanigans, one of the major twists being that Peggy is in fact Gibbons’s moll, sent by him as bait for yet another attempt on the film; inevitably, she develops warm feelings for Phil that, after he has been captured and handcuffed to a pipe in Gibbons’s basement, lead her to incapacitate Gibbons with drink and try to set Phil free, or at least bring in the cops . . . and suffers a dose of Gibbons’s belt when he catches her.

Gibbons tries to extort all of the fugitive Bauer’s money, not just the agreed fee for the heist of the film; Fredericks swoops to Bauer’s rescue and, Hal shot dead but Gibbons bizarrely just knocked cold, the two Nazis takes Phil with them as hostage to their rendezvous with a seaplane on the East River. But a furiously hungover Gibbons is on their trail, as are the cops whom Peggy has finally been able to contact . . .

The first twenty minutes or so of this oddly clumsy outing read, despite the Nazi plot element, more like a product of the 1930s than of the late 1940s, with Faye clowning fairly grimly as Phil’s goofy assistant Roger and a lot of lips-licking about the fashion models and any other shapely females that might heave into view, not least Bessie (O’Kelly), the Argus receptionist. After that, although there’s the occasional not-so-witty one-liner, humor is largely eschewed save for a fairly good comic turn by Melton as rebarbatively chatterbox cabby Stanislaus Krandobowski, to whom Phil at one point entrusts the vital film.

Gilmore copes well here as the femme fatale who acquires a conscience; her character is credited as Peggy Lake but is in fact called Peggy Lane throughout. By 1942 the stage-trained Gilmore was established as a minor Hollywood actress, a regular in modest roles in even more modest B-features, when she met a young Russian immigrant who was hoping to break into the movies. They married in 1944, although it would be a few years before he realized his dream, his first movie role—after a couple of minor TV appearances—being in PORT OF NEW YORK (1949). By 1960, when they divorced, that actor, Yul Brynner, was an international star and Gilmore largely forgotten.