Max (Rains) is The Great Maximus, performing a fake telepathy routine around the shabbier music halls with his wife Rene (Wray) as assistant. One night, as Rene loses her way from the stalls to the circle and it becomes obvious to the audience that his “telepathy” relies on her coded messages, his gaze catches the face of Christine Shawn (Baxter) as she watches from one of the boxes; at once he’s empowered with genuine clairvoyance, and correctly describes the letter that a jeering spectator is holding up.

Later, on a train to Manchester for the next gig, Max, Rene, Max’s mother Topsy (Clare) and his congenially boozy business partner Simon (Field) encounter Christine again, and once more Max is filled with the gift of prophecy—this time foreseeing that the train will crash. He pulls the cord, the quintet disembark, and sure enough the train crashes.

Christine, whose father Lord Southwood (Stewart) is the owner of the Daily Sun, ensures that Max’s successful prophecy becomes the talk of the land. Impresario James J. Bimeter (Warren) gets Max top billing at the London Paladrome (sic) for a princely three hundred pounds a week, but Max soon disappoints the theater owner by failing to come out with any new prophecies. Further, Rene is becoming concerned that Max may have fallen for Christine. In fact, it’s Rene whom he loves, but it’s Christine—who eventually admits that she’s deeply in love with him and would take him from Rene if she could—who’s the source of his psychic powers.

His successful offhand prediction that 100–1 rank outsider Autolychus will win the Derby (“Autolychus can’t win. They’re only running him in the hope he’ll fall dead to save the expense of shooting him,” declares Southwood’s editor, Brooks [uncredited], beforehand) brings him yet further glory, even as, back at their hotel, Rene prepares to leave him. Chasing after Rene to try to stop her, Topsy falls downstairs and dies—a death Max foresaw in a vision that he dismissed as figmentary. 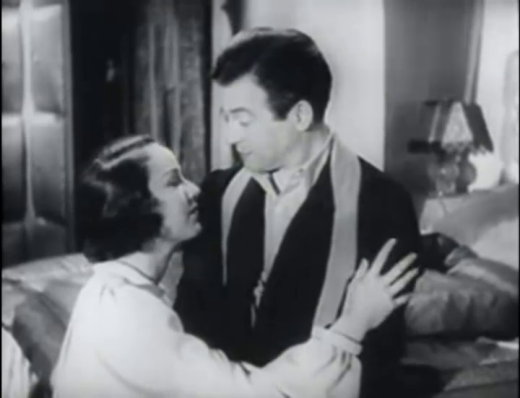 Max foresees a terrible mining disaster, the collapse of a shaft under the River Humber but—in the teeth of fierce opposition from the pit managers— is unable to persuade the miners to forgo the imminent night shift. The disaster occurs exactly as Max predicted; two hundred men are killed with a further 110 unaccounted for. The public and the law turn on him, blaming him for the tragedy: his impassioned plea to the men, the argument goes, created the panic that led to the accident.

In court, a whisker away from condemnation, he sees Christine once more and, eyes flaring with psychic power, predicts that the 110 miners are safe: “They’re tapping their way out by the eastern shaft . . .” Exactly this proves to be true, and the jury spontaneously acquits him.

A brief closing sequence shows us Max and Rene observing the protagonists of a carnival mental act in the US, where they’ve gone (we assume) to be together in blissful obscurity.

First and foremost this is a fantasy movie, its obvious subtext being that mere mortals should not crave superhuman powers: however well intentioned the recipient of those gifts might be, they’ll soon enough lead to his downfall, and likely to more widespread tragedy. This was the subtext also of the following year’s The Man who Could Work Miracles (1936), based on the 1898 H.G. Wells story. Where the later movie was done as a whimsical Roland Young comedy, however, The Clairvoyant, while not a noir itself (although quite often described as such), is unashamed by its own darkness and sits far more concordantly alongside the UK protonoirs of its day.

On Amazon.com: The Clairvoyant